Hello everyone! I’m starting a new meme because I want to post more but also because I won’t pass up an occasion to talk about witches! Come on, which one of us wasn’t obsessed witch witches at some point?? (I still am!!!)

This is such a fun comic! I reviewed the eARC just when I started this blog and I think it comes out soon so defenitelly a great atmospheric October book! It had some clishe but beloved elements like a witchy bookshop, classic witchy aesthetic, and magical forest but it also had so much rep!

This one is technically not finished yet but the 2nd season ended recently and it’s on a brean and I’m caught up so whatever. It’s all about brooms here! (And some other flying magical objects, of course) The MC of the S1 has learning disability (can’t read) so she and her familiar move to get an apprenticeship in a broom repair shop instead of pursuing further education at school. It also has a lot of rep and very witchy atmosphere!

Who doesn’t love Terry Pratchett? I know that he also has a series that specifically features witches but I just finished writing my thesis on this book (and its translations) last month so I just have to mention this one! Tiffany Aching goes on a journey to save her brother from the evil Fairy Queen. Her only help is a talking frog and a bunch of small blue men. The 2nd book of this series has more witchy aesthetic, to be honest, but I still love this one!

So, this one has an f/f/f love triangle, an investigation of murder rituals, a witchy shop, elemental witches, AND takes place at Salem?? Can’t wait to read it!!

Apparently, it’s an f/f Raven Cycle?  So, woods, looking for some powerful magical person, and a group of misfits who fit well together.

Witches AND friends to lovers romance? Now, that is a treat! Also, I think it’s NA which is always nice to see.

What books about witches have you read? And what do you want to read?

Leave links to your TT as well! 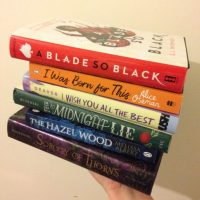