I’m back with Waiting on Wednesday! I was supposed to post WLW Wednesday today but I won’t embarass myself with the fact that I’ve read only one sapphic book in the span of two weeks and I didn’t even like it much so have this instead!

This is one of the 2021 releases I’ve been eyeing lately and honesltly, I can’t wait!

Today’s pick is a book…

Waiting on Wednesday is a weekly meme created by Breaking the Spine that spotlights upcoming releases. 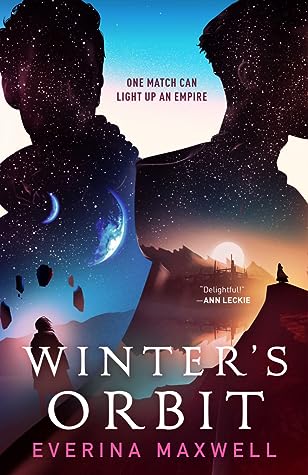 While the Iskat Empire has long dominated the system through treaties and political alliances, several planets, including Thea, have begun to chafe under Iskat’s rule. When tragedy befalls Imperial Prince Taam, his Thean widower, Jainan, is rushed into an arranged marriage with Taam’s cousin, the disreputable Kiem, in a bid to keep the rising hostilities between the two worlds under control.

But when it comes to light that Prince Taam’s death may not have been an accident, and that Jainan himself may be a suspect, the unlikely pair must overcome their misgivings and learn to trust one another as they navigate the perils of the Iskat court, try to solve a murder, and prevent an interplanetary war… all while dealing with their growing feelings for each other.

This book has it all!

“Winter’s Orbit—a popular work originally published online—is a queer, romantic space opera. In an unforgiving empire, a scandal-prone prince and a dutiful scholar, who are forced into a political marriage, try to prevent an interplanetary war.” [x]

What books are YOU waithing for?? Share your WoW/CWW in comments!